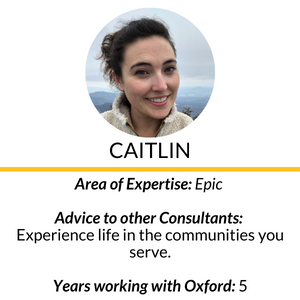 Meet Caitlin: Caitlin has been partnering with Oxford for almost five years. She has worked with Epic™ since 2008, with a background in medical terminology and biological life sciences. Her entry into consulting was a happy accident — her recruiter called her by mistake but ultimately placed her in a new role that she was excited to accept. From there, Caitlin developed a very close relationship with her Oxford recruiter. “We’re Facebook friends now. If you regularly talk to someone once or twice a week, you really should make it official,” she said.

Caitlin’s longevity in the consulting industry is a point of pride. Through Oxford, she has worked at several different facilities, participated in countless go-lives, and continues to showcase the value she brings to her clients through her impressive track record of success and consistency.

Her most recent project: Caitlin began working with this health system four years ago as a Stork™ Principal Trainer supporting its three-wave go-live. When the client realized she also had experience in clinical documentation, they kept her onboard to assist in that area. Over a two-year period, Caitlin helped this client go-live in 10 different hospitals.

The biggest challenge for Caitlin on any project is also her favorite part: mentoring established employees in a new position. She’s been able to guide several individuals throughout her tenure at the hospital. “It’s always nice to grab someone who is, for example, a nurse, and teach them how IT works.”

When Caitlin first arrived on this assignment, the client displayed the typical nervousness she was used to seeing. However, this time it was compounded by the fact that they were also undergoing a merger – as a result, the client’s brand had grown from five hospitals to ten. That meant, in addition to IT training, Caitlin would have to also mitigate any culture shock resulting from the merger. Nevertheless, Caitlin rose to the challenge — she spoke her mind, unafraid to let the client know what aspects made sense for them and what didn’t. Because of her bold guidance, the client was able to move nine facilities live in only 18 months. She remains onboard with this client to offer her expertise.

To other consultants in her field, Caitlin offers the following advice: “After work, don’t just sit in your hotel room. As much as our clients come first, and we’re careful to take care of our jobs, it’s amazing how much you can learn about a client, based on the community in which they live. It makes a huge difference to be able to connect with people, to understand what their life is like outside of the hospital.”

When she’s not busy working, Caitlin is an avid skier and self-proclaimed beach bum. She also enjoys traveling to learn about the world around her (one perk of her job that she finds incredibly appealing).

Caitlin’s open nature, friendly personality, and honed expertise makes her a perfect addition to any Epic go-live team. She is the very embodiment of the relationship-building philosophy at Oxford.

Back to Insights button

Back to Insights Get in Touch