Meet Ralph: Ralph is a project management consultant and subject matter expert in pharmaceutical cleanrooms, facility design, and regulatory compliance. He received a mechanical engineering degree from LeTourneau University. His industry career began at a major water heater manufacturer where he worked as a junior project engineer. From there, his career progressed to a Director of Engineering role at a biotech company. 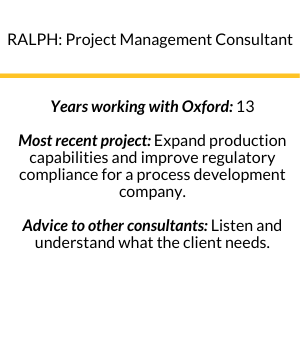 Ralph began consulting when a former colleague contacted him about an opportunity at a start-up that was building a new aseptic processing facility. Ralph led the team through the design, construction, and validation effort with great success. Since then, he has worked on assignments including regulatory remediation for medical device and pharmaceutical clients, working to correct design issues in aseptic processing facilities, and managing equipment installations to large complex capital projects.

Ralph has been working with Oxford since 2007 when his recruiter, Erin, contacted him. He said she was professional, personal, honest, and businesslike.

Ralph’s greatest professional achievements include serving on the leadership team of the first large scale profusion-based mammalian cell culture facility in the United States and, in another role, being part of the first fully modular aseptic processing facility in the US. “In both cases,” he said, “we were setting standards for the industry in technical and regulatory requirements.”

Ralph says, “I enjoy projects where I can provide leadership from the beginning of the project through regulatory and production acceptance.”

About his most recent project: Ralph worked with a large pharmaceutical company that had invested in a process development company. The process development company was responsible for developing processes for new products that were typically used in Phase I and II clinical trials. The goal of the project was to expand the company’s existing production capabilities and improve regulatory compliance. The initial project manager was unable to guide the project in the right direction, so Ralph was asked to direct the project and work through management issues that had surfaced prior to his arrival.

According to Ralph, the biggest challenge was helping the local team adapt to change and comply with corporate goals. Ralph and his team needed to work together seamlessly to ensure that the final product met expectations. Despite their reservations, the team was excited to have new production capabilities and a new leader to help expand the production area while keeping the facility operating. Ralph was able to convey the importance of corporate goals to his team and unify the workforce.

While developing a relationship with his team, Ralph found them eager to learn, stating, “Like any project, there were some stressful times that stretched our patience, but we learned to define issues and find a way to compromise in a way that would meet the project requirements. I was able to impart knowledge and training over lunches and build a good rapport with the team. It was probably one of the most fun projects I’ve had. I was able to provide a resource to the team beyond just the scope of the initiative. People would come to me for my insight into how to address solving various production, regulatory, and construction issues.”

Ralph’s advice to other consultants in his field is to “listen and understand. We need to really understand what the client needs – not just what they say they need, but what’s behind those needs. Try to grasp the underlying, systemic issues the client is facing. Once you understand those, you can help them solve their problems and meet their goals.”

Ralph uses years of strong industry expertise and innate leadership skills to guide and help him see each project through to completion and ultimate success. His natural ability to teach and lead makes him the ideal partner to help each client reach their full potential.

Back to blog home

Back to Insights button