We have combined our recruiting strength to better serve you, and are excited to be part of Oxford Global Resources.

The unification of our business goals enables us to continue providing the high level of service that you have come to trust from our teams, with an expanded service offering for the Sciences industry.

Meet Lisa: Lisa has spent 20 years focused on what she calls the “human side of technical implementations” in regards to her role as an Organizational Change Management Training and Communication Manager on SAP Projects. She began her career in consulting when she took a temp job at a small consulting company and started reading various SAP books to educate herself. As time went on, Lisa began building relationships with consultants, calling them to speak about their availability and interest in various job placements. Through speaking with them, she learned quite a bit about the field, and when a company reached out to her to set up a training program, she leaped at the chance to try her hand at being a consultant. She went independent in 2004 and has been consulting ever since. 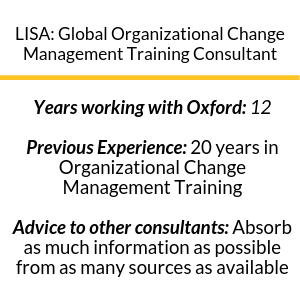 Lisa has been working with Oxford since 2007 when she was contacted to set up a training program for a client who was 18 months post-go-live. Immediately after her interview, her Oxford recruiter called and told her the client was eager to have her start the project. Over time, as Lisa was placed on more assignments, she was able to facilitate connections between Oxford and the clients with which she was contracted. Lisa said the main difference that set Oxford apart was the fact that her recruiter called her every few months just to check in — even if she didn’t have an assignment for her at the time. She said, “It felt like I had a friend, a really good friend. I don’t stay on the market very long, but when I was, Oxford was always the first call I would make to let them know I was coming available.”

Years later, Lisa was placed on a project with a chemical company as the Global Training Manager. The client needed to bring in 150 SAP trainers and they asked Lisa if she knew of a company that could manage the global project. She referred them to Oxford. The contract continued through several extensions, and as a result, Lisa had the opportunity to develop great relationships with several members of the Oxford team.

Lisa’s relationship with Oxford has truly evolved into a partnership. When asked about her relationship with the Oxford team, Lisa shared that “Oxford has been very good to me, they treat me very well. I consider them family. They’re always my first call when I know I’m going to be coming available. I work with a lot of vendors, as I’ve been in this business for 20 years, but Oxford is just head and shoulders above anybody that I’ve worked with. It’s Oxford that has kept that relationship going beyond the project. Oxford stays in touch and they develop that relationship, and that’s what makes them so much better. I really feel like as they have those conversations with the consultants, they are building a personal relationship, but they’re also getting a sense of personalities, strengths, and weaknesses that make for better matching with projects, customers, and clients. I think that’s why their retention rate is so high because they are so good at understanding which personalities will or will not fit on a particular project.”

When asked about her greatest professional achievement, she spoke of a “big bang” go-live she managed at 75 sites across 57 countries, in 9 languages, with 150 external trainers, and 800 super users. She was brought in to protect the client’s interests, and although the client knew what they wanted, she did her best to make sure “they had what they needed, whether they knew they needed it or not.” Several considerations in such a large project could have easily been overlooked, and Lisa did her best to ensure that each aspect of the project was taken into account.

About her latest project: When Lisa arrived, she was the fourth OCM program lead the client had in less than one year. The client was three months pre go-live and had a training team in place that was inexperienced with SAP. In addition, her supervisor presented her with a unique challenge: “You’ve got a problem on your team, and I don’t know what it is, but you need to find it and you need to fix it.” Lisa was up for the challenge. Three weeks later, Lisa was able to identify that the training team was facing resistance from the business due to their lack of experience. As a result, she recommended bringing in highly skilled SAP trainers who were able to facilitate productive conversations and successfully train the members of the organization. In fact, two of the team members Lisa brought in fit so well on the team that they remained on board two and a half years after the completion of the project.

She was also able to recognize the resistance to the term “change management.” Her solution was simple: call it “business readiness” instead. Because of her modest yet elegant solution, she found that the organization was much more receptive to new ideas and initiatives that she and her team presented.

Once she had established an expert training team and the business was amenable to the changes, Lisa approached the project in three phases. The first was the consolidation of three SAP systems into one, followed by an acquisition with a full solution, and lastly, a system upgrade to SAP S/4HANA. During the second phase, Lisa and her team created greenfield training for the entire solution and set it up in such a way the client could continue to use it for new hires. As Lisa and her team set up such robust materials, the client began to trust in their expertise and they were able to exhibit their full range of talent in phase three. Lisa’s viewpoint was “actions always speak louder than words. I can tell them for days what my team and I can do, but we have to be able to show them what we can do.” Lisa was also able to mentor an individual to lead the training program after she left the assignment. To this day, the client continues to utilize Lisa’s training program.

After the initial project was completed, Lisa was asked to stay on for an additional eight months to assist with the reorganization of the IT team.

When asked what advice she would give to consultants, Lisa said to absorb as much information as possible from as many sources as available, “whether it’s other consultants who have gone before you, taking classes, reading books, or watching YouTube. Absorb knowledge constantly so you can adjust your approach to fit the needs of the client.” She also stressed the importance of really listening to the client and making sure you clearly understand their needs and expectations.

Lisa is truly a champion for Oxford. Her excellent work, along with her dedication to each project on which she is placed, make her a valuable asset to any OCM project. When asked where she saw herself in five years, Lisa enthusiastically stated she would like to be in semi-retirement, working part-time as a recruiter for Oxford! We would be overjoyed to have her.

Tags
Careers in Staffing
Back to blog home

The Oxford Blog provides insights on the world of work, with a focus on issues related to staffing, professional services, careers, and key industry trends.