Oxford provides services across the globe with dedicated offices in the countries listed below. If you need more information on specific services in your country, please contact us.

Meet Doug: Doug has been working with Oxford since July of 2017, when his Oxford recruiter Chris reached out to him through LinkedIn. One of the things that immediately stuck out to Doug was the confidence Chris had in his ability to match Doug with a variety of opportunities that fit his skills and career interests. When speaking about his recruiter, Doug says “Chris is very down to earth, and we always have really easy, natural conversations. He does a great job of keeping me posted on upcoming opportunities when my contract is ending. He is a great guy to work with.” 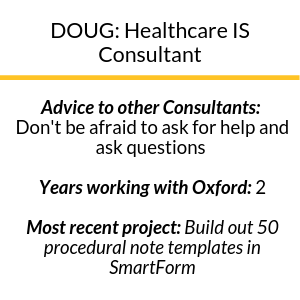 Doug was introduced to consulting through some colleagues he met working at his first job. The thought of consulting was intriguing, so Doug went out to lunch with them to learn more. Being able to learn about consulting and gain insight from their perspective was invaluable. When the opportunity to apply for a contract position came along, Doug took it, armed with the knowledge his colleagues previously provided.

About his most recent project: Doug was hired to build out over 50 procedural note templates in SmartForm for a client. He quickly created, communicated, and executed a plan to incorporate all the new procedure note templates into the system and validate them with the end-users. When asked what the biggest challenge was on this assignment, Doug said “the biggest challenge with any EpicTM implementation is convincing skeptical end-users that the new system is going to be worth it in the long run. I work to resolve that skepticism by partnering closely with those end-users and acknowledging that the change will be difficult. Once you acknowledge that, it makes it easier for both parties to relate and work together in a collaborative way.” Doug has mastered the ability to work well with others, saying that everyone on this project was incredibly helpful and welcoming; he often went out to dinners with his team and had the opportunity to sample a wide range of Texas barbeque!

When asked how he contributed to the success of the project, Doug said that he put an emphasis on incorporating teaching into his overall strategy. His goal is to leave each client with the foundational knowledge they need to define their own long-term success.

To other consultants in his field, Doug offers this advice: don’t be afraid to ask for help and ask questions. “Usually, I will try to figure things out on my own for five to ten minutes, but then I am reminded that it’s important to collaborate with others and ask questions when I need to. Knowledge sharing is really what makes Epic successful, and word-of-mouth answers are often the best ones you’re going to find.”

Doug’s collaborative attitude and ability to interface with people effectively are qualities every consultant should aim to emulate. As he continues to partner with Oxford, we expect great things will come out of his future assignments.

Tags
Careers in Staffing
Consultant Resources
Back to blog home

The Oxford Blog provides insights on the world of work, with a focus on issues related to staffing, professional services, careers, and key industry trends.